Dr. Wagner & Partner took a closer look at the booming co-working movement and asked startup communities around the world what they would love to have in a co-working space. The biggest discussion erupted in the London based startup community, which could be traced back to the high demand for co-working spaces in London. Europe’s financial capital is not only the biggest startup community in Europe but also the most expensive place to set up a new business, let alone renting an own office, which makes co-working very popular among London’s entrepreneurs. These facts, paired with the upcoming lean startup philosophy and bootstrapped business processes, make co-working spaces the only viable option for a startup in need for office space.

It became obvious that a co-working space should offer much more than just a desk, chairs and free internet, because entrepreneurs want not only to pay for a working space but for a striving, like-minded and inspiring community space, which “goes the extra mile” and is not overpriced.
Talking about price, it became clear that most entrepreneurs prefer one fixed price per desk per week or month, instead of flexible tariffs where one has to pay extra for internet, telephone, toilets, kitchens or other amenities. Lease contract flexibility is also very important for every entrepreneur, which is why monthly or even weekly leases would be the best option. The shorter the lease contracts are, the higher the fluctuation might be, which could also harm the community and pose a potential threat to the good atmosphere. This shows, that setting up a co-working space is a long road paved with manifold trade-offs, because entrepreneurs are creative minds who all have their own individual wishes and ideas about an ideal co-working space. 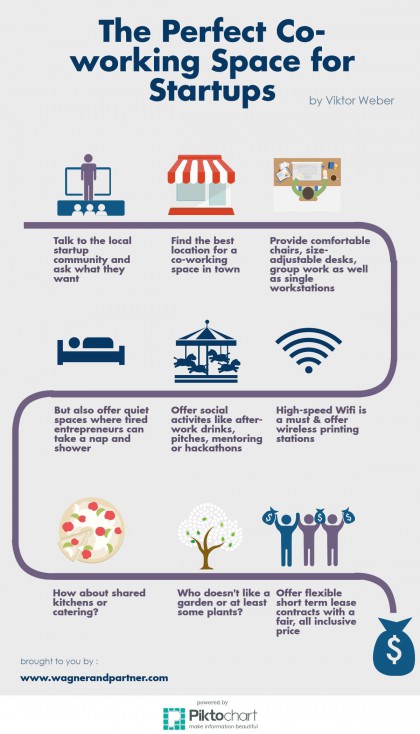 The bottom-line and most basic co-working space should thus offer not only high speed internet, flexible lease contracts, desks and comfortable chairs, but also quiet spaces as well as loud co-working areas for social activities. Mentioning this, the social aspect was very prominent during the discussions in the startup communities. Entrepreneurs wish to work with peers that share their interests and help each other out, which can only be achieved in a good co-working atmosphere. Thus, shared kitchens and communal areas for open discussions were wished for as well as hosting of in-house events like investor-meetings, pitch-evenings, after-work-drinks, mentoring talks; all organised by the co-working space operator.
The atmosphere of the co-working space should be warm and friendly, which could be achieved by plenty of daylight, proper artificial lights, plants or a garden. Due to the often long-working hours, the entrepreneurs wished for extra-comfortable chairs, height-adjustable desks, bar tables, a quiet room, where one could take a nap, mini fridges or kitchen facilities, showers, which are cleaned by professional cleaning service. Furthermore, some of the entrepreneurs would want to have a full-catering with breakfast, tea and a late lunch, organised by the co-working space operator.

A co-working space is a conceptual tightrope walk, because entrepreneurs wish on the one hand that they can work quietly on their own and on the other hand the want a vibrant community, which offers social activities. The separation by quiet, loud and community space alone, requires a relatively large amount of space, which must be completely furnished. The organisation of relevant social activities like mentoring, pitches, hackathons or conferences requires a certain involvement and knowledge of the co-working space operator with the local startup scene. Due to uprising entrepreneurial community around the globe it can be stated that co-working will not fade away but increase heavily, which offers great business opportunities for the real estate industry or entrepreneurs.